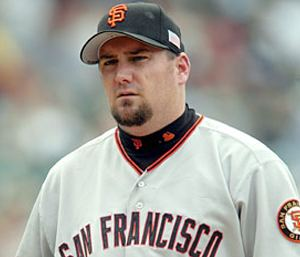 Scott Eyre attended the College of Southern Idaho in Twin Falls, Idaho and was drafted by the Texas Rangers in the 9th round of the 1991 Major League Baseball Draft. He played minor league ball at their Class A affiliate, the Charleston Rainbows. He was traded to the Chicago White Sox in 1994 and made his major league debut in Chicago on August 1, 1997. He would finish the 1997 season making 11 starts, going 4-4 in 60.2 innings. The following season, Eyre would split the season between the rotation and the bullpen, appearing in 33 games while making 17 starts. Eyre had the worst season of his young career, going 3-8 while walking 64 batters in 107 innings of work for the White Sox.

Eyre was selected off waivers from the Blue Jays by the San Francisco Giants in 2002.[4] He made the transition to the National League impressively as he had a 1.59 ERA in 21 games for the Giants.

On November 18, 2005, Eyre signed a three-year contract with the Chicago Cubs and pitched his way to an ERA of 3.38. He was one of the more consistently used relievers on a pitching staff that often struggled. He was used mainly in 7th and 8th inning situations in tandem with Bob Howry with Eyre being used more often in lefty vs. lefty situations.

Eyre has noted that Lou Piniella could not remember his name for the longest time and called him "Stevie" for a while, jokingly, even after he learned Scott's real name. According to Cubs play-by-play broadcaster Len Kasper, Piniella has since begun intentionally pronouncing his name "Stevie Aye-er.

During a game against the Houston Astros on September 12, 2007, Eyre left the Cubs’ bullpen, and wandered around Minute Maid Park. WGN’s cameras eventually spotted him watching the game through an opening in the stadium’s score board. On June 15, 2008, in a game against the Toronto Blue Jays, Eyre allowed a 1-out sac fly run, ending his streak of 33 consecutive appearances without allowing a run, a Cubs franchise record.

On August 5, 2008, Eyre was designated for assignment to make room for Kerry Wood, who was coming off the disabled list. He was traded to the Philadelphia Phillies two days later for Brian Schlitter.] However, the move allowed Eyre to win his first World Series ring when the Phillies won the 2008 World Series.

In November, 2008, following the World Series, Scott re-signed with the Phillies as a free-agent, and was signed through the 2009 season. On November 12, 2009, Eyre was granted free agency.

Come out and support our own Bradenton Marauders!  Click the logo for events, schedules, promotions, and game tickets!